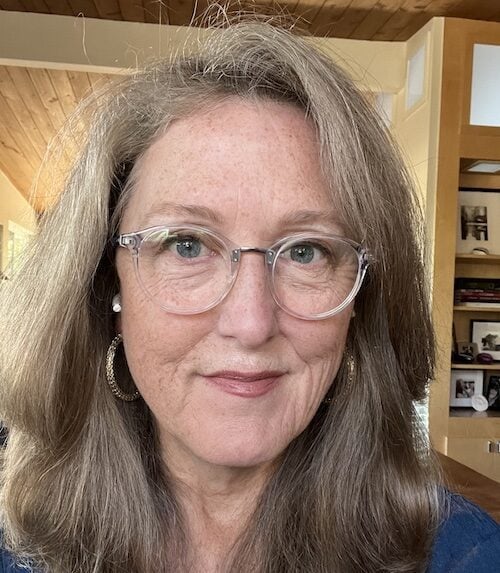 An Interview with Barbara Denempont, Executive Director of the Gangaji Foundation

“For me, redemption means being included, and that means including myself. When you include yourself, this inclusion extends to all, to everything around you.

OM: In 1997 you wrote a letter to Gangaji, which we featured in the Oasis Magazine. Your letter is about the source of human malevolence and the grace of redemption. Has this question of redemption been of lifelong interest to you?

The question really had at its root a wellspring of self-hatred, the idea that something inside had to be gotten rid of, or punished. I began to recognize the deep unkindness that was operating in my own mind toward my own self. I was taking the hatchet and coming after myself in a certain way. More than any other pattern, that particular lifelong habit of suffering ultimately had to be unwound and dismantled. That letter reflected my recognition that the suffering I had been experiencing inside was by my own hand. There’s a point when you have to put that down. It may feel frightening to put it down, but it has to be put down.

You think it’s the one thing you want to stop, but I had to see that in some way, that strategy had been working for me. So I had to examine it holistically and not imagine that this question of human malevolence had to do with something outside of me.

Another way I could say it is that there was a deep longing for kindness, that we be kind to one another, and a feeling of being assaulted by a lack of kindness in the world. Ultimately I had to recognize within myself how I was playing into that. This is where the question “What is my life about?” becomes very personal. Am I going to be about beating myself up for nothing, just because there’s some thought rolling through my head about how worthless I am? Now that is some really unnecessary suffering – a total waste of a life! This is the moment of truth telling where you see that you are actually responsible for some of the horror of the human condition.

OM: So the face of malevolence, evil, the wrongdoing in our world, you ultimately see as an internal situation?

It is an aspect of our humanity, and it is fundamentally a strategy for survival. Some of the most violent crimes are committed when people feel that they have to do what they are doing for their own survival.

Satsang is, of course, ultimately the meeting with death. When death is fully met, a choice often appears where you see you don’t actually have to do what you thought you had to do to survive. Some concept of yourself might have to die, but it is only in this internal meeting with death that you can finally get to the grist of what it is you really want for this life.

OM: How would you describe the possibility of redemption?

For me, redemption means being included, and that means including myself. When you include yourself, this inclusion extends to all, to everything around you.

From the point of view of Western civilization, Adam and Eve were thrown out of the Garden, and I think that’s the central concept from which our culture operates. However we’ve been raised, we have within us this deep feeling that we’ve been tossed out. Wanting to belong, wanting to be welcomed home, is a longing for redemption.

Ultimately, there is a recognition that comes from Ramana all the way through to us here today, and that is, “I am home.” “Who I truly am is Home.” In that, everything is settled, regardless of the circumstances that you find yourself in, and that is the redemption, that is the homecoming, “I and the Father are One.” Ultimately all spiritual traditions are pointing to the longing to come home.

Regardless where we find ourselves physically, circumstantially, we can discover that we already home, and that discovery brings us back to what is innocent and free of history. That is the redemption.

OM: Is there anything that you feel isn’t redeemable?

On a certain relative level there are definitely things that can’t be fixed; the harm has been done. But I think the point of what we’re offering here is that whether you are the perpetrator of a crime or the victim the crime, there is something that remains untouched.

As a victim of crime I realized that even though I had been violated, and something had been broken in the relative sense, still there remained something that was pure and innocent and free. Whether victim or perpetrator, you can realize the same truth of redemption.

I have always felt that “There but for the grace of God go I.” We are all guilty of some kind of wrongdoing. We have either gotten away with it, or we may have committed “crimes in our hearts,” as Jimmy Carter famously once said, or we have committed crimes against ourselves or our families that are unseen by society or are not a part of the criminal code. We’ve all made our mistakes. We have all sinned.

OM: While on retreat with Gangaji, you read a letter to the group from one of the prisoners enrolled in the Freedom Inside course. You were clearly deeply moved by the letter, as was the group, many of us brought to tears. What is it that touches us so much in these letters from behind bars?

These letters are the proof that the homecoming is absolutely boundary-less. No one is excluded. Love is unconditional. Freedom is unconditional. It is not about what you look like, or what you did or didn’t do, or who you’ve hurt. This homecoming is possible for anyone, anywhere, any time, just waiting for us to enter. This is the passion for inclusion. Inclusion augments us all. This is ultimately the possibility of redemption for the human species itself.

We receive letters from prisoners that illustrate how their environment can be soul crushing. One letter in particular led me to lean in to the very human grief of our worst failures. I do feel that part of my opportunity is to meet that pain fully. It’s not just for those living in prison to meet that pain, but for me, too.

That brings us back to where we started: malevolence. We can recognize our capacity for malevolence as a species, and then see what else is possible if we’re really willing to meet death, if we are willing to meet ourselves. We can discover the original innocence.

Previous
Feast of Losses
Next
I Am a Changed Man