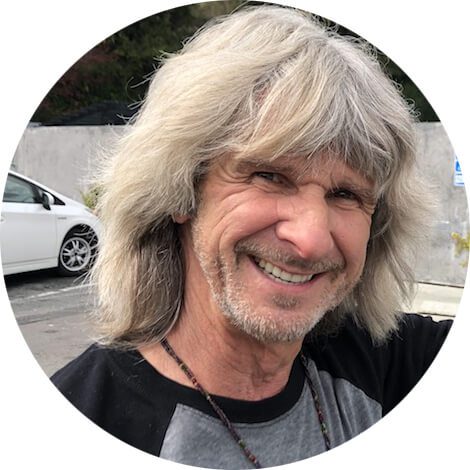 Minstrel, poet, bard, perennial Deadhead, and a most cherished member of the Gangaji Community for more than 20 years, Coyote met Gangaji late in 1995. It was the year his mentor, Jerry Garcia, died. A friend invited him to a meeting in San Rafael. The hall was packed, and right away Coyote knew, “Gangaji holds the same space in my heart as he does.”

There was another meeting the next day, so Coyote and his friend went back and signed up as volunteers. At the time he was working as a plumber, and his friend was a carpenter. Within a couple of days they had been taken on to help build gate posts at Gangaji’s home in Stinson Beach.

And he’s pretty much been volunteering ever since, a mainstay of the set-up crew for the Bay Area and Ashland, and a regular at the West Coast retreats.

We asked Coyote why he keeps coming all these years. “Gangaji relentlessly points to the same place in a variety of new fresh ways,” he said. “She is my favorite comedian, my teacher, my heart.”

At one point he recalls raising his hand with a casual attitude, and Gangaji busted him on it. But these days he’s “maturing by the grace of living long enough.”

Just as with Jerry Garcia and the Grateful Dead, if there was a concert, Coyote would be there; and now if Gangaji is showing up, Coyote will be there, helping to unload the van, set up the stage, lay out the chairs. “Why wouldn’t I be there, for the rest of my life? It’s better for me and better for everyone else.”

These days Coyote is a fixture at many of Gangaji’s retreats, bringing his mobile library of Rumi and Hafiz poetry for anyone to browse and share during the retreat, and always ready in satsang with his guitar to share himself in song and poetry.

Thank you Coyote for this gift of freedom that you share with us all. Here are two songs from recent retreats.