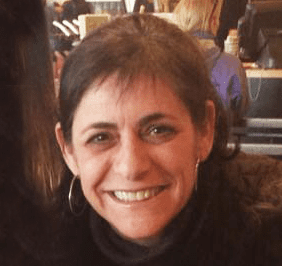 “For a while, I couldn't even find my love of truth. I felt so lost in grief and disillusionment. It felt like the bottom fell out for me, and my connection to the truth shifted in a way that I couldn't have predicted.” –Michele

The first thing you notice about Michele Sondheimer is the light that pours out of her. Her eyes transmit an undeniable knowing that has borne the pain of shattering loss and has stayed true. I’m so grateful to her for sharing herself with us all in this intimate conversation about waking up, love, grief, and what inspires her to continue to support Gangaji’s work. 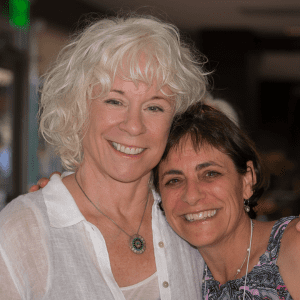 Harriet: Tell me about when you met Gangaji.

Michele: I was introduced to Gangaji in May of 1993. I didn't know it at the time, but I had been on a search for about a year. I had what I can now define as a huge longing. It seemed like a mild form of spiritual emergency. I was uncomfortable in my own skin, and searching for something. A friend of mine called me up and she said, “You have to go see this lady!” I had never been to a meeting with any kind of teacher before, but I decided to go. After the first few meetings, I was on fire. I couldn't get enough.

There was one particular moment I remember when Gangaji was speaking. As she turned in my direction it was like an arrow shot across the room and went into my heart. It felt like a dam exploded and the floodgates opened. She wasn't even looking at me in particular. It was out of the corner of her eye. After that, it was so clear that Gangaji was my teacher. I was in love with her. I was in love with Ramana. I fell in love with this love. Since then, this love has been the guiding force in my life.

How can you repay the one who shines the light on the truth of your being?

Harriet: How has Gangaji supported you in meeting the challenges of your personal life? I know you met your husband, Dave, through Gangaji.

Michele: Yes, I met Dave working at the Gangaji Foundation in the spring of 1996. That’s a whole other story, but our relationship started in the summer of 1997. We were married in 2000. I was still traveling quite a bit with Gangaji, and Dave was very supportive of that, and of my love for Gangaji. Our daughter, Alana, was born in December of 2003, and then in February of 2004, Dave got his first oral cancer diagnosis and had a treatment. It wasn’t until 2010 that he developed a second type of oral cancer. He underwent surgery and then a year later, there was another recurrence. He did some more treatment but in May of 2012, he passed away from that cancer. 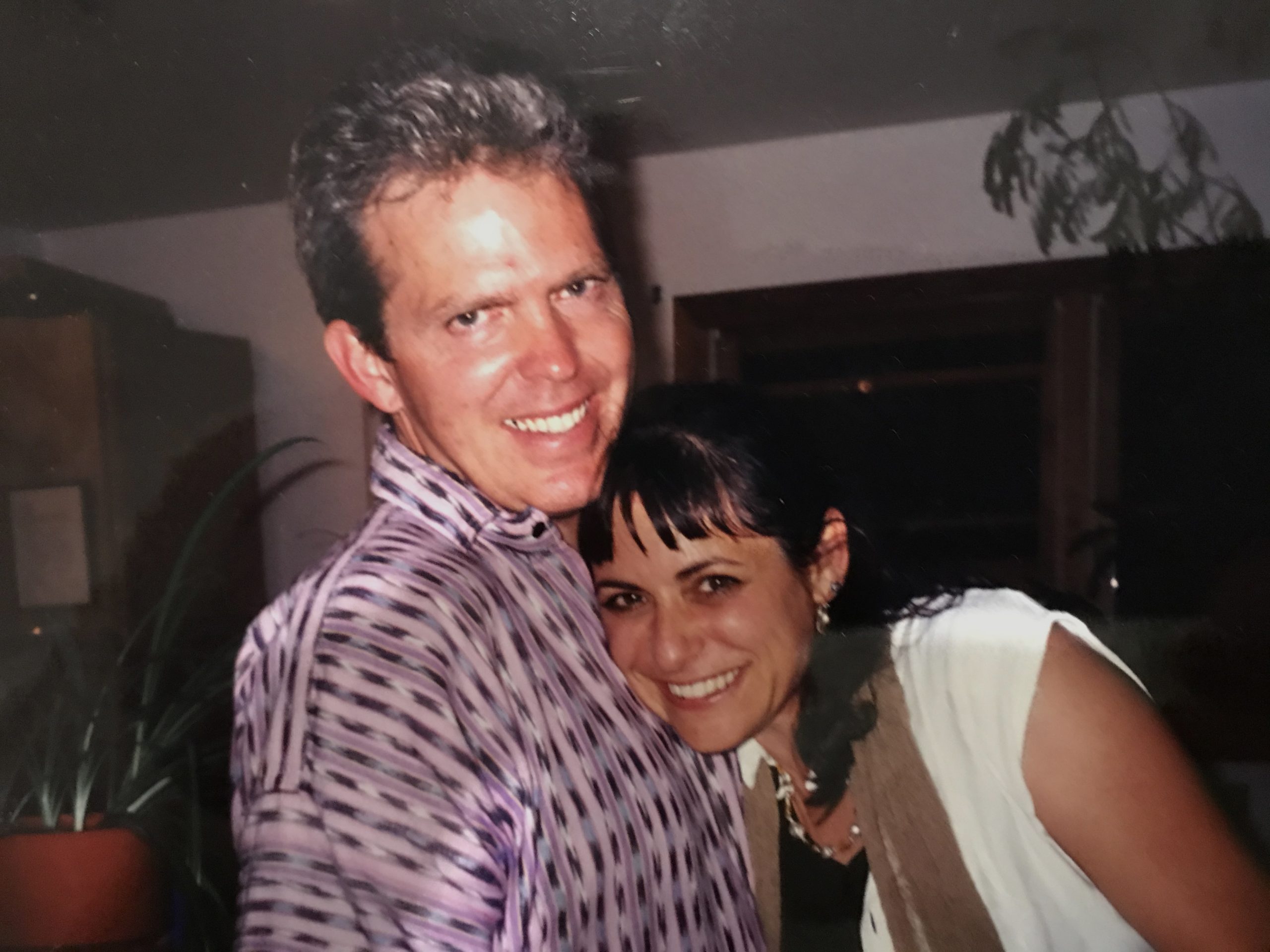 Dark Night of the Soul

After that, I went through the depths of a dark night of the soul. For a while, I couldn't even find my love of truth. I felt so lost in grief and disillusionment. It felt like the bottom fell out for me, and my connection to the truth shifted in a way that I couldn't have predicted. There was an awareness of myself, of watching myself go through all of that. But there was no stopping it. I wasn't going to try and fix it.

It was humbling. But it was also a great teacher. I didn't turn my back. I knew that somehow I would get through it, and Gangaji was so helpful in just letting the grief be there. My experience really confirmed for me that who you are is still here, regardless of your circumstances or your emotions.

Harriet: Your experience is such a testament to just staying with it, facing the pain, and trusting.

Michele: Well I did have many moments of feeling that I shouldn’t be so affected, because, you know… I'm more spiritual than that. This is not who I am. Why is this blasting me to smithereens? I should not be so affected. Why is it taking so long? There were other people around who didn't outright say that, but there was a little bit of an implication.

Gangaji was so beautiful with me. I went to Hawaii and spoke with her about it. I really trusted the process. I don't think I would have been able to do that if I hadn’t had the support of knowing that I was being held in this grace.

I knew the truth was still with me even though for a couple of years it felt like I was being shattered inside. I literally felt like I had shards of glass in my heart. But the awareness of truth was a balm throughout that. Eventually, I was able to find my passion again and discovered a capacity to meet people in an even deeper place than I had before.

Watch a clip of Michele speaking to Gangaji in 2016 about how she came home to herself after seemingly going to hell and back.

Even in the Worst of Circumstances

Harriet: Thank you for sharing that. I also wanted to ask you about your experience of working as a prison program volunteer.

Michele: I love the prison program. Early on I used to go into the prisons. There were three or four of us who would drive down to Florence once a month. Later I also went into Englewood. I really enjoyed the exchanges with the inmates. To witness their aha moments, the melting away of hardness, and their excitement was so thrilling. I remember we would come out of the prison elated. It was so rich, and I saw such potential.

I think it’s why Gangaji has always had a soft spot for the prison program. It’s such a fine example of how it doesn’t matter where you are. Even in the worst of circumstances you can have the realization of what is untouched by any of it, and find fulfillment that is not dependent on your circumstance, your place in life, how much money you have, whether you have a partner, whether you're free, or whether you're in prison. Their conditions are certainly not ideal. To experience that firsthand—the intensity on the yard, the energies of the different gangs, angry people—and then to go into the little chapel room and have these profound dialogues with men who were waking up…it was amazing.

Harriet: Why did you choose to support our fundraising campaign this year?

Michele: I am so aware of how the Foundation has continued to grow and expand. It’s awesome the way that you've all educated yourselves in new technologies and modalities of reaching people, and I want to support that. It's an ever-changing landscape, and I know it requires effort and creativity to continue to evolve, but you all have grabbed the bull by the horns. I want to support you being able to have the reach to get Gangaji out there, by whatever means are needed.

To me, it is so important to continue to make Gangaji’s teaching available, especially in this day and age when we are faced with challenges to the existence of our species.

The One Thread of Sanity

The one thread of sanity that I have found is this awakening. To know that no one is separate from me, from consciousness, or from God or truth, to be able to meet people from the place of no separation…Well, if more people had awareness of that, they might treat each other differently and act more responsibly. 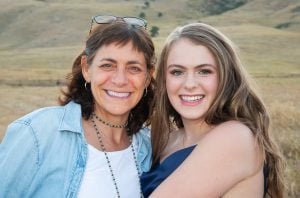 Gangaji talks about responsibility. Once you awaken you have the ability to respond from a different place. That’s my experience. Not that I'm perfect, not that I don't fall back into waves of insecurity. But there is a certain maturity and simplicity of just resting in that, even though my heart definitely gets broken all the time by what I bear witness to.

In this lifetime, it was Gangaji who reached into my heart and exploded it. I know that who we are is not broken and is infusing everything that we think is broken. The truth is not broken.

Harriet: Thank you so much, Michele. You make it so easy for me because you're just really speaking the truth so eloquently. Thank you for your support!

Over the years Michele has fulfilled many roles at the Gangaji Foundation. She’s been part of the staff, a volunteer, a regional coordinator, a prison correspondent and visitor, a video Satsang host, and much, much more. Michele lives in Boulder, Colorado with her daughter, Alana. She’s had a successful career at Organic India and she’s now a new grandmother to her step daughter’s baby.

Photos of Gangaji and Michele and with Alana by Dhruva Baumbach.