In Their Hands: A Shout Out to Our Transcribers
with Joanna Jackson

Did you ever wonder how we select clips for the podcast or video? How do we find just what we are looking for a new blog or book, given we have more than 30 years of recordings? Our team of dedicated transcribers, living in all parts of the world, use their many hands (literally) to make Gangaji’s archives available in countless ways.

Joanna Jackson began leading the program in 2016. (Thank you Joanna. Has it really been that long!?) Here is her report sent last week calling out a couple of “super-transcribers” on the team…

I just wanted to mention as well as Renee, we have another super-rockstar transcriber these days, Diana. Not sure if I've mentioned her much before - she is doing all the podcasts now, and also cranking through an amazing number of regular transcripts. I just sent her 11 new recordings at once, because I can't keep up with her when I send smaller numbers!!!

Renee has been doing all the ones from 2011 with the Spanish translation, and she seems to really be enjoying that. My sense is she has spent time in recent years in Mexico and Costa Rica, so I asked her if she'd be interested and she said yes.

She has said she's really enjoyed learning the "spiritual" terms and that has helped her be able to have those kinds of conversations with friends in Spanish. They take a lot longer so she's not cranking out as many transcripts in sheer numbers, but when they come back and are like 95 pages long, it's clearly not that she's not doing as much transcribing!!!

Anyway, just wanted to recognize both of them to the Foundation. We have several other regulars too which is awesome!!!

If you are interested in being a part of this loving community of volunteers you can go to our “get involved" page, and fill out a volunteer form. There are plenty of meetings that need a pair of hands to transcribe them.

Take a look at how some of our team have introduced themselves from around the globe: 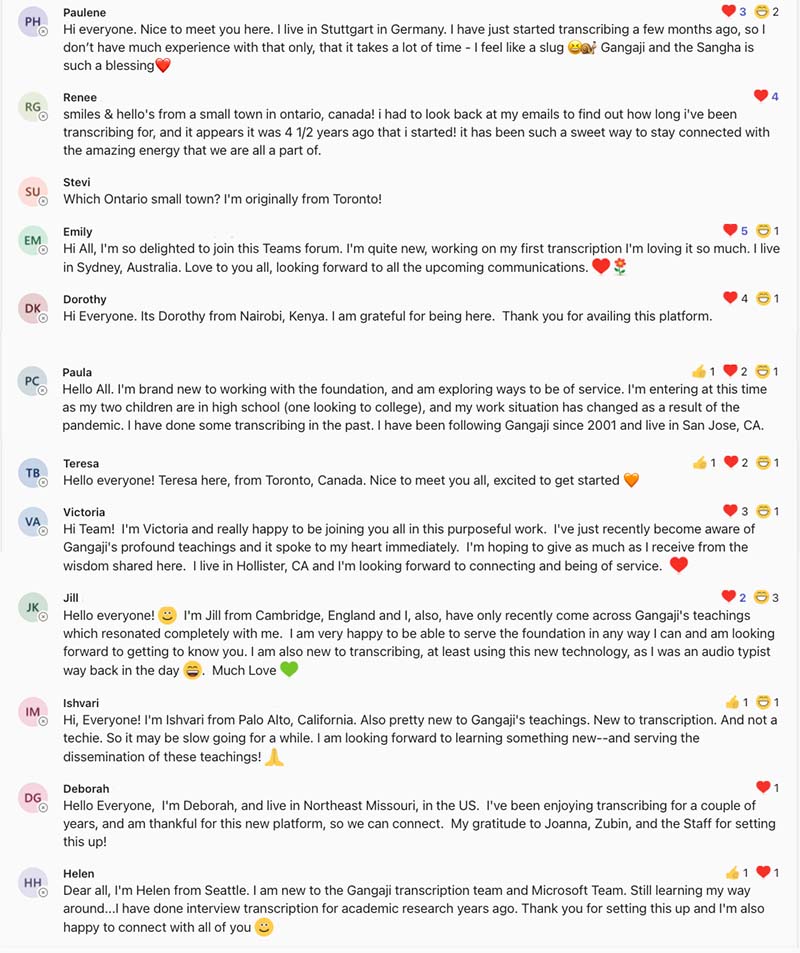