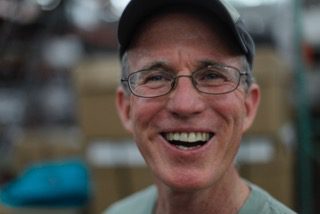 Beneath the Shears
by Glenn Watt
November 13, 2019

Speeding west on 80,
mid-afternoon, the woman
on the podcast about trauma
and our difficulty sometimes to heal
being led, like a tourist,
down through the once familiar
layers of her psyche
grown suddenly foreign
to those lethal pruning shears
of self-hatred where the show
then ended, running
out of time.

44 years ago, asked to leave
by my first wife shortly after
my first son's first birthday,
staying at a friend's house
120 miles away, to help
with room and board I pruned
his young apple trees so severely
three died.

The weight the podcast woman
left us with I carried, simply,
another ten miles or so,
unable at the moment to feel
my way deeper either.

You can most easily see it
in small children, this garden,
this unfettered blossoming
of innocence and joy,
and we were all small once,
weren't we, a garden
we so often cast ourselves
out of these days
when we take the bite
and the pruning in earnest
once again begins.

What a gift then,
tooling down the Interstate,
to have my 2 ½,
3-year-old beaming face
push up out of those shadows
and keep me company for a ways
here in the austere
landscape of my 65-year-old one.

So now, gather together with me
around this hospice bed
where a father lies, struggling
to breathe, and think of it
as the soul, radiant, playful,
perhaps even a bit shy,
peeking out like a little boy
more and more these days
from under that furrowed brow.

This poem from Glenn Watt was inspired by listening to several of Gangaji's Podcasts. Originally from central Wyoming, Glenn lives in Fairfield, Iowa. In October of 2017 he and his wife were somewhere in Nebraska on their way to visit family when they first listened to “Waiting to Heal,” on A Conversation with Gangaji. However, Glenn didn't begin writing the poem until early March of this year, and it was shortly thereafter that his dad went into hospice and suddenly began to appear at the end of the poem. It was in its final revisions when he heard Barbara Denempont dedicate a couple of episodes of Being Yourself to self-hatred and it occurred to him to send the poem to Barb, Hillary, and Gangaji as a way of saying thank you. Thank you, Glenn for listening so deeply!

Previous
Letters from the Forum
Next
The Passion of Inclusion