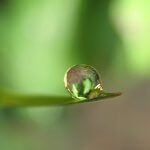 It's often said that if one is certain of the love that lies within oneself, the choice to be in a relationship or to be single is freed up. Then relationships are no longer centered around insecurity and identification. Some people feel better when they're in relationship, but that's not entirely a good thing if they're rooted in dependency. Some people are more accustomed to being single, but what if that's not by choice? And what about the feeling of loneliness we sometimes feel no matter who we're with? This month, we're asking, what does it mean to be alone?